So, You Want Internet? But Do You Know Which Internet Solution Is Right For You?

So, You Want Internet? But Do You Know Which Internet Solution Is Right For You?

So, with over 30 million active Internet users in South Africa, it’s not surprising you’ve decided it’s high time you got in on the action. But which Internet solution is going to best suit your needs?

The answer to this depends largely on what you want to use the Internet for. Maybe, like three-quarters of our online population, you’ll use it predominantly to send and receive emails, and to find out information about goods and services. Perhaps, like 50% of us, you’ll also use it for watching or streaming video and music content, or for Internet banking.

Of course, it’s not just your planned usage that influences your choice of Internet solution. It also depends on where you live. Is fibre available, or will you have to use ADSL? And what about LTE or GSM? Let’s take a look at a couple of your options in a little more detail:

South Africa has, admittedly, been a little slow getting off the mark when it comes to rolling out fibre Internet. As far back as 2000, Western Europe and North America were already enjoying the benefits of a well-established fibre infrastructure. In South Africa in 2007, engineers were still struggling to get permission from towns and cities for all the trenching and digging necessary to install a fibre network. By 2015, fibre was still only its infancy and our broadband costs were 10 times higher than in the UK, despite the fact that our speeds were five times slower.

In 2019, fibre is, at last, starting to become more widespread. The government has stated there will be fibre optic cables throughout the entire country by the end of 2020, with the aim of bringing Internet access to every household by 2030. However, it’s an expensive (approximately R60 billion), slow process, so whether or not this goal is realised remains to be seen. 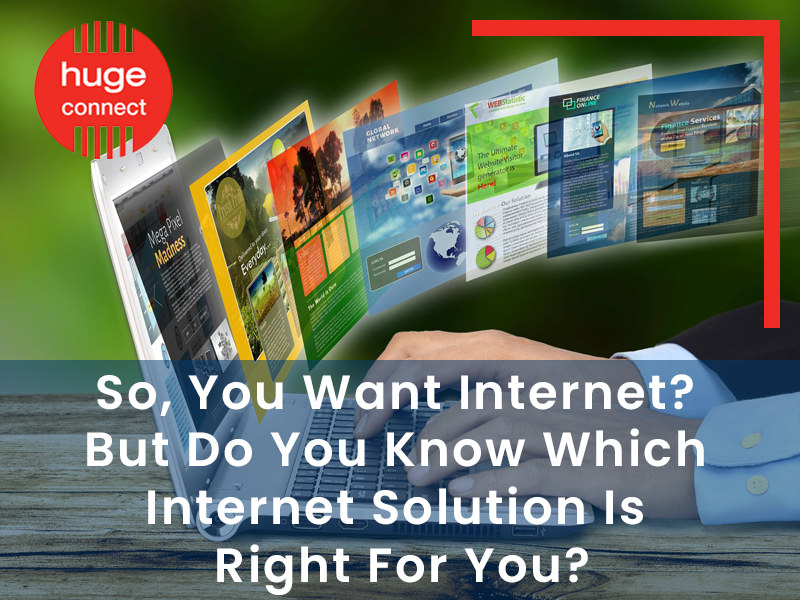 Despite the ongoing rollout of fibre across South Africa, there are still many areas that don’t have access to it – and may not for several years. So what can you do in the meantime if you’re desperate for an Internet connection? Long-Term Evolution (LTE) is a broadband solution that’s completely wireless. This means it’s completely mobile (unlike fibre). Because it relies on broadcasting towers instead of cables, it’s not vulnerable to cable theft and isn’t affected by the weather. LTE data costs are usually higher than ASDL or fibre, but the mobility and dependability more than make up for this.

But what do we actually mean when we talk about bandwidth?

Essentially, bandwidth is like a garden hose – the wider it is, the more water can go through it in a given time. In other words, the more bandwidth you have, the faster you can download data to your computer. How much bandwidth you need depends on how you use the Internet. Video streaming is very bandwidth hungry, so you’ll need a faster line (at least 3Mbps). But if you only really use the Internet for email, social media and general web surfing, a 1Mpbs line should be more than enough.

The really great thing about Voice over Internet Protocol (VoIP) is that calls are, essentially, free (you only pay for your data). As long as you have a data connection, even long-distance calls can be made free of charge. VoIP handsets are also much better than regular handsets, and the voice quality of calls is usually superior too.

At Huge Connect, you’ll save an average of 40% on your mobile, fixed and international calls with our VoIP system. For more information, contact us today.

What is Your Plan A, B & C For Card Transactions?

Payment Security For Merchants: How To Beef Up Your Systems