In your opinion, what is the fundamental reason that the Global Infrastructure Hub (GIH) in the Asia-Pacific region estimates a staggering investment growth of up to $2.5 trillion in connectivity infrastructure? If you’re guessing that economic growth is the result of the investment in connectivity, then you would be right on the money…so to speak.

Economists have found it tricky to pinpoint a single, all-encompassing link between connectivity solutions and economic growth – but it exists, nonetheless.

With the bulk of the world enjoying internet access, and over 5 billion of them connected via mobile phones, the economic landscape is in a constant state of flux as ‘the way it’s always been done’ changes frequently.

The Advance of Digital Communications

The subject of digital communication over the past decade has become a hot topic, along with the realisation of the profound economic and social impact it brings.

The direct and immediate effects of the introduction of affordable access to reliable communication are positive and irrefutable:

In some cases, the introduction of reliable, affordable connectivity infrastructure and the associated applications riding on the back of it have resulted in the reshaping of entire industries and boosting the GDP of the affected country.

A comprehensive report from the World Bank Group highlights some fascinating insights.

“The transformative impact of broadband technology on economic growth has been widely recognised. This impact is achieved by reducing information transaction time and connecting the entire digital ecosystem in a seamless manner.

“Broadband adoption increases economic growth. Several influential papers have found remarkably close estimates of the positive link between infrastructure use and GDP. Two studies, both looking at samples of developed economies, show that the addition of 10 broadband lines for every 100 people increased GDP – one by 0.7–1.0 per cent (Koutroumpis, 2009) and the other by 0.9–1.5 per cent (Czernich et al, 2011). Using a different methodological framework and a broader dataset, the World Bank reported estimates of GDP growth as 1.38 percentage points for developing countries and 1.21 percentage points for developed countries (Qiang and Rossotto, 2009).”

In developing countries, however, this potential economic growth has been hampered by the unstable link between users and service providers in remote areas over copper cable. The connection quality and speed, in this instance, deteriorate over long distances with the additional problems of ageing infrastructure and cable theft. 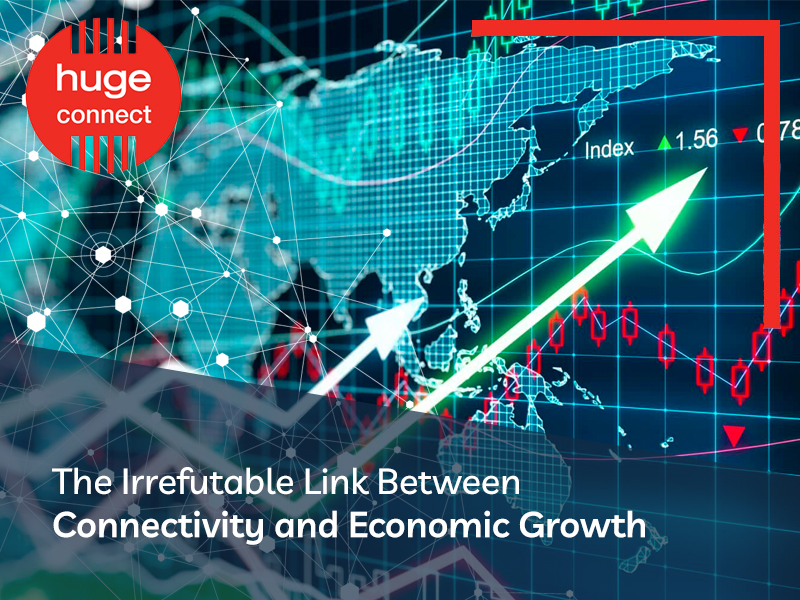 While we certainly acknowledge the challenges, we would like to focus on the positive impact that connectivity offers.

ITNewsAfrica says, “Research shows a 90% correlation between ICT investment and socio-economic development in a country, and connectivity and digital services will play a major role in driving sustainable inclusive growth. Connectivity is not just about a voice service or faster internet but gaining access to a variety of cloud services that enables participation in the digital economy.”

Looking at the numbers relating to internet use and fiscal investments in technology and infrastructure, one of the core benefits lies in job creation.

The ICT sector is set to remain one of the largest employers worldwide, with anticipated figures hovering around an additional 758,800 new jobs in 2020. Further to this, connectivity results in job creation as it frees up laborious, mundane tasks and allows focus into different areas. (Source)

Further, another positive way that connectivity is working for African countries is noted by the World Economic Forum.

“This Connecting Africa programme has seen us provide broadband services via satellite to SOS villages across 13 countries from Malawi to Mali. BT’s technology has already reached nearly 145,000 people and with this connectivity in place, many more lives are being transformed in classrooms, clinics and communities.

“The effects are clear. When children have access to the internet, they use it to study. 88% of children in our pilot did so. Use ICT to introduce a healthcare management system and doctors tell how they can spend more time with patients. Share the connectivity with the local communities and people can keep in touch without having to travel.”

Proactive and preventative money-saving techniques are another way to increase economic growth. Consider these interesting facts around the construction industry – a key player in economics:

“Typically, 20% of large projects run over time and up to 80% run over budget. However, the digital future is already offering innovative solutions to this multi-billion-dollar problem. Data collected by sensors on machines can help monitor when equipment needs repairing, provide instant inventory numbers and locations, enhance safety, and boost operator productivity.

“A McKinsey & Company report showed that the digitization of an American tunnel project – involving more than 600 vendors – saved 20 hours of staff time per week, reduced report generation time by 75%, and increased document transmittal speed by 90%. The study also highlighted a $5 billion rail project that saved $110 million by using automated workflows for reviews and approvals. Project management software allows progress to be tracked and reported, as well as giving users access to experts and best practices.”

In order to compete on the international stage on any level, a country needs affordable, high-quality broadband. This simple element boosts productivity and makes the export of products and services more viable.

A 2006 report exploring the link between the Internet and increased trade in developing countries made the following findings:

“The export-driven economic growth of many Asian economies is seen as being due to advancements in broadband infrastructure and other high-tech capabilities, alongside appropriate policy reforms.

“An OECD (2016) study of 27 developed and 66 developing countries found a 1 percentage point increase in Internet use is correlated with a boost in exports of 4.3 percentage points.” (Source)

Just as with social networks which connect people and allow the sharing of knowledge and information, a solid connectivity infrastructure facilitates the sharing of technology and ideas between people, businesses and, indeed, countries.

Our hope is that we can continue to contribute to South Africa’s economic growth by continuing to provide stable, fast and reliable connectivity solutions.

If your business stands to benefit from our solutions, let’s connect.